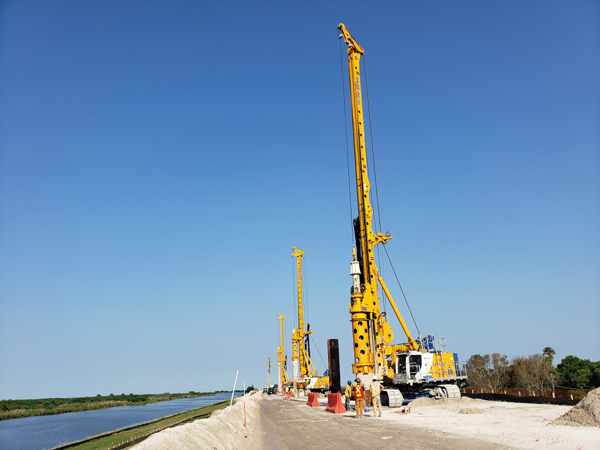 Florida / East St. Louis / Colorado, USA – Flood protection is a concern of high priority in the USA. For this reason, the U.S Army Corps of Engineers (USACE), a federal agency of the Department of Defense is responsible for the maintenance of dams and canals as well as flood defense. Currently USACE is implementing several measures in a number of US states, and BAUER Foundation Corp., the American subsidiary of BAUER Spezialtiefbau GmbH based in Odessa, Florida, is involved in a total of five major projects with a total contract value of approx. 200 million US dollars (184 million euros). Four of the construction projects – Herbert Hoover Dike Task Order 1, Task Order 3, Task Order 5 and the East St. Louis Cut-off Wall Project – are being executed by Bauer Foundation as a direct contractor of USACE. Bauer is involved as a subcontractor in the Teller Dam Project in Colorado. 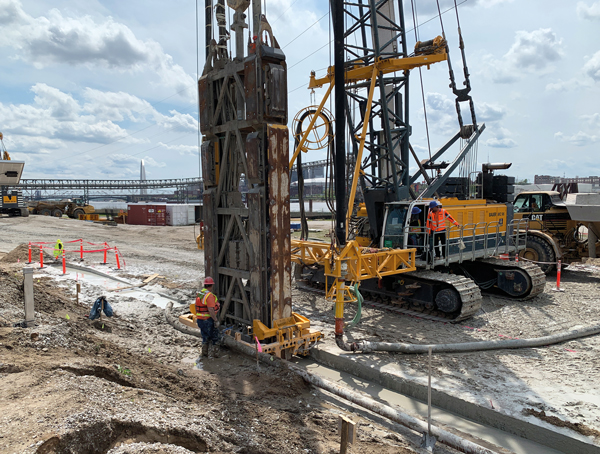 Remediation of the Herbert Hoover Dike

Covering a total area of 730 square miles, Lake Okeechobee is the largest freshwater lake in the U.S. state of Florida. Even though it extends over a length of about 35 miles and a width of about 30 miles, the lake is very shallow with an average depth of only 10 feet and lacks a larger natural outflow. To protect against storm surges and flooding due to unusually high water levels, the existing dike already received its first upgrade in the 1920s. In the 1960s, additional canals, floodgates, and dams were added. Since the early 2000s, the U.S Army Corps of Engineers has been responsible for coordinating the rehabilitation of the approx. 140 miles long dike around Lake Okeechobee. In 2007, BAUER Foundation Corp. was initially tasked with the execution of cutter-soil mixing walls (CSM) along the southeastern part of the dike. Based on previous successful cooperation, Bauer was awarded further partial contracts for the years between 2011 and 2021, among them works on various culverts. 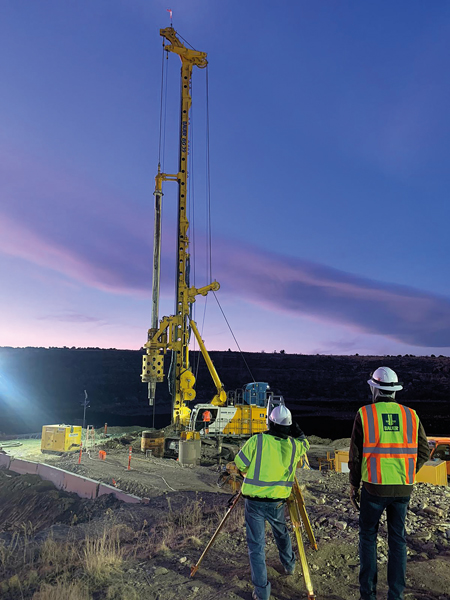 The current work phase includes the execution of a cut-off wall over a total length of 28 miles along the southwestern section of the dike. Divided into five sections, also referred to as task orders, Bauer Foundation managed to win three of the five contracts: Task Order 1, Task Order 3 and Task Order 5. For the first two sections, a total of approx. 3,325,000 square feet of cut-off wall will be created to a maximum depth of approx. 66 feet. Pre-drilling is required to remove organic deposits and loosen the occasional dense layers of sand and underlying weak limestone. Subsequently, the actual soil mixing will begin with an RTG RG 27 drilling rig, using the CSM method which combines the features of a trench cutter while mixing the soils in-situ. In addition, the jet grouting method is used to connect the newly constructed cut-off wall with the existing culverts. “Bauer, as the main contractor, was also tasked with the installation and subsequent removal of the necessary work platforms and is responsible for the access roads to the site. Following the works on the cut-off wall, we are also responsible for the revegetation and asphalting of the finished dike and the quality control tests and installation of monitoring instruments,” explains Andrew Ebendick, Project Manager with BAUER Foundation Corp and in charge of Task Order 1. “The work on the first two projects has already begun. Successful completion of the work on Task Order 3 is expected in the spring of 2022 and Task Order 1 in the fall of 2022,” according to David Millar, Project Manager for Task Order 3.

At the beginning of May 2020, Bauer Foundation was awarded Task Order 5 with a total value of approx. 42 million US dollars. This is the last construction phase comprising a total length of almost 4.1 miles and the construction of approx. 750,000 square feet of cut-off wall. In total, with the three construction phases,  Bauer Foundation was commissioned with the execution of 17.7 miles out of the total of 28.6 miles of the south-western part of the Herbert Hoover Dike.

In East St. Louis, in the U.S. state of Illinois, another existing levee system on the east bank of the Mississippi is receiving an upgrade. The existing levee structure is built on sandy ground that extends to the limestone bedrock at a depth of approx. 135 feet. These sandy soils allow the water to undermine the levee contributing to erosion of the system, and neighboring developments are under threat from frequent and severe flooding. To create a cut-off wall which will restore the existing dike, Bauer Foundation uses a grab and a cutter in combination to create a single-phase cut-off wall with a self-hardening slurry. “For this work, we use a DHG diaphragm walling grab and a BC 40 cutter, each attached to an MC 96 duty-cycle crane,” explains Matteo Bertoni, Project Manager at BAUER Foundation Corp. A total of approx. 570,000 square feet of cut-off wall will be created over a length of 4,600 feet and to a maximum depth of approx. 143 feet. Bauer, as the main contractor, was also commissioned with the provision of the necessary work platform, the installation and dismantling of the guide wall for the cut-off wall works, and with the final quality and lab testing. The location of the project poses a particular challenge: several important utilities cross the work front on the existing dike on the banks of the Mississippi River. As a result, Bauer can only carry out the works within certain timeframes and at specific locations, all of which requires close cooperation with all participants. Mobilization of the construction site went underway in March and completion of the overall project is scheduled for January 2022.

The Teller Dam at the Turkey Creek River is located within the U.S. army post Fort Carson near Colorado Springs in the state of Colorado. The remediation works at this location are also coordinated by the U.S. Army Corps of Engineers. The main contractor, Komada LLC, commissioned BAUER Foundation Corp. with the execution of specialist foundation engineering works for sealing off the dam against potential infiltration and the associated erosion of dam material. For this reason, the cut-off wall works are carried out in two sections: at the left abutment and at the end of the dam, approx. 12,500 square feet of secant pile wall will be created, apart from that, approx. 19,000 square feet of grout curtain are produced via injection method to seal off potential infiltration paths. The cut-off wall will be installed in the subsoil over a length of approx. 350 feet and to a maximum depth of 120 feet. “The secant pile wall will be created with a diameter of 1,500 mm, a BAUER BG 39 is going to be used,” according to Cyril Bou Sleiman, BAUER Foundation Corp. Project Manager in charge. “The injection works for the grout curtain will commence this summer and a KLEMM KR 806 will be used for this purpose.” The works are expected to be completed by November.