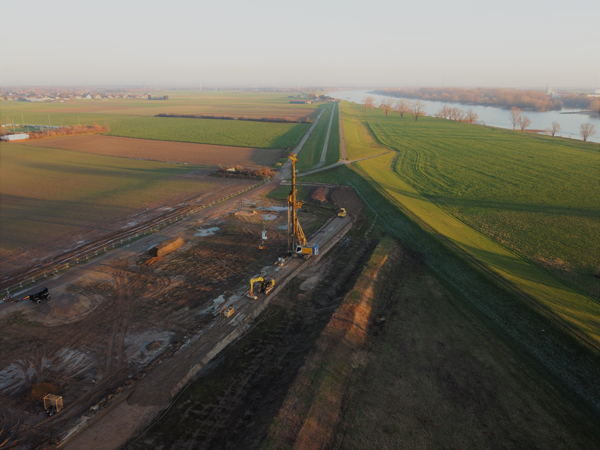 Muendelheim is an old farmer´s and former fishing village on the right bank of the Rhine in the large Rhine arch between Kaiserswerth and Ruhrort. The Rhine is one of the major European rivers which has its sources in Switzerland and flows in a mostly northerly direction through Germany and the Netherlands, emptying into the North Sea.

To prepare Muendelheim against the flood events in the future, work commenced in 2019 to improve the watertightness along a future dike. For this reason, the Municipality of Duisburg represented by Wirtschaftsbetriebe Duisburg AÖR commissioned BAUER Spezialtiefbau GmbH to construct a Mixed-in-Place Cut-off to seal the subsoil below a new dike.

To give the river Rhine more room to expand at high water and thus avoid peak flows, the existing dike at Muendelheim will be relocated, creating approximately 60 ha of retention space. In preparation for the relocation, a cut-off wall is being constructed along the line of the future dike to protect the adjacent city district from groundwater pressure