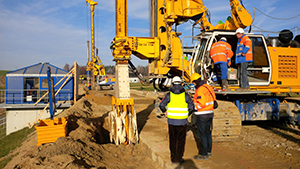 The project site is in the Free State of Saxony in the administrative district of Görlitz, in the municipality Berthelsdorf. The flood control reservoir (FCR) dams up the river Petersbach in the catchment area of 63.5 km² in case of a flood. After completion of the FCR in the fourth quarter of 2010, a considerable amount of leakage water flew in during the test damming downstream of the dam body; as a consequence the structure could not be used and no damming was possible in such a condition. The construction of a milled cut-off wall using the cutter-soil-mixing method (CSM) aimed at effectively and permanently preventing the previously occurring groundwater flows in the underground barrier and the subsoil. For this purpose an additional cut-off wall was constructed upstream of the dam crest up to a maximum depth of 28.70 m. Before the actual cut-off wall works could start, 5,500 m replacement bores had to be executed (drilling diameter 620/880 mm) to remove rock particles in the dam structure and the granodiorite formations. The milled cut-off wall (wall thickness = 640 mm) was constructed using the cutter-soil-mixing method in the two-phase system with a BAUER BG 28 while having two cutter gearboxes BAUER BCM 10. A total of 4,970 m² cut-off wall were constructed with this method. The connection onto the throughflow structure was executed with the supsequent jet grouting. To do so, approximately 260 m jet grouting columns having a diameter of 800 to 1,200 mm were constructed in a depth of up to 28.50 m using a BAUER IB 18. After the successful completion of the works in June 2014, a damming up test could be done to proof the hydraulic effectiveness of the cut-off wall executed in excellent quality and with precision. 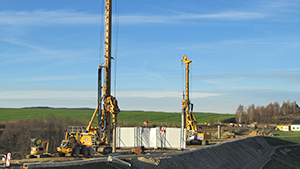