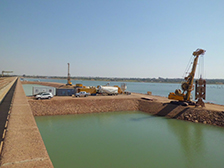 The Matala dam lies around 225 km downstream from the Gove dam at the confluence of the Que and the Kunene river, on the edge of the Upper Kunene. The dam was the first major structure to be completed in the basin in 1954, and was renovated in 2001 with further work being carried out in 2010. It has a storage capacity of 60 m³ with a mean surface area of 41 km². The functions of the Matala dam are to: 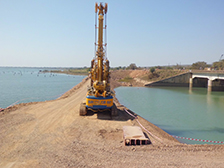 To increase the Matala Dam in the southern Huila Province in South-West Angola it was decided by the owner to rehabilitate und modernize the dam, spillway, road-bridge and to construct a new spillway section. A temporary cofferdam is required upstream of the existing structure between piers P6 and P16 for a period of approximately 2 years. It will protect works in the enclosure and provide a safe working space upstream of the existing concrete structure. A cement-bentonite cut-off wall was chosen for waterproofing the upstream cofferdam.

The cement-bentonite slurry wall consists of a 0,60 m nominal thickness wall constructed from a working platform set at an appropriate level above the reservoir level.

The core of the cofferdam (Zone 1) is made of well-graded crushed stone 0-56 mm dumped and pushed into place below water and compacted above water level. Zone 1 is the material in which the cement-bentonite cut-off will be excavated.

BAUER Spezialtiefbau GmbH was awarded by SNC-Lavalin to install a One-Phase Cement – Bentonite slurry cut-off wall with a minimum thickness of 0,6 m, keying at least 2 m into the overburden, and if this not exist leave the cut off wall connected with the bedrock as best as possible. 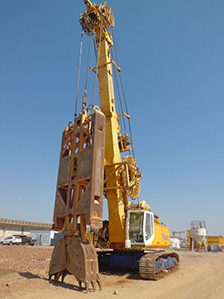 The minimum crest elevation of the working platform (1306.85 m) was selected at an appropriate height above water level in order to ensure the stability of the excavation faces and also that a slight gradient towards the exterior of the trench prevents inflow (and dilution) of the slurry.
Embedment in rock was made using a BG 15 with an aggressive core barrel after excavation by the hydraulic grab reach the bedrock level.

For a continuous wall overcut between panels was initially of 0,5 m. During the project high quality work permitted to reduce to 0,3 m to optimizing the process. The maximum drilling depth was 10,81 m

Overburden: soft gray slurry of clay containing some silt and some sand

Bedrock: reddish granitic bedrock with a fine to medium grained matrix. According to the bedrock coring, the bedrock is slightly to moderately weathered. Core recovery of about 90 to 100% in most boreholes and RQD values between 60 and 100% with 78% in average suggest fair to excellent quality bedrock.

Construction Period: July – October 2012
Bauer executed the works in 2012 and completed the works successfully and in time.