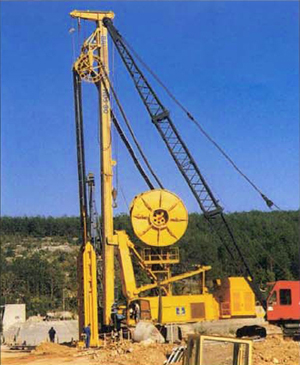 At 10:49 am on 28 January 1993, five huge explosions detonated by the former Yugoslavian Army damaged the 450 m long by 63 m high Peruca storage dam. In addition to other important parts of the structure the central section of the clay core was almost completely destroyed. The Peruca barrage which forms a 541 million m3 reservoir is part of the Cetina River hydropower scheme high in the mountains some 50 km north of the Adriatic port of Split. This scheme represents the main energy source for southern Croatia, generating about 3'000'000 MWh per year.

Based on the results of a comprehensive investigation, the owner decided to restore the central section of the dam core by constructing a 9'000 m2 plastic concrete cut-off wall, 1 m thick. The contract was awarded to an international joint venture of BAUER Spezialtiefbau GmbH, Schrobenhausen, and Geotehnika, Zagreb.

The cut-off, located 4 m upstream of the centre line of the embankment, is 53 m deep at its maximum, and had to be socketed not less than 2 m either into the underlaying Karst limestone or the lean concrete base slab of the grouting gallery.

A combined team from the Bauer parent company and the firm´s Austrian subsidiary used a BC 30 slurry trench cutter, mounted on a BG 50 carrier, and a grab rig for the pre-excavation. The criteria were tight: verticality ≤ 0,2 % of the depth, compressive strength of the plastic concrete
≥ 1,0 MN/m2, elasticity module of E ≤ 400 MN/m2 and watertightness of k ≤ 10-8 m/sec. Levels were recorded continuously and were met throughout the contract.

The work was completed in January 1995, ahead of schedule. With an artillery installation only 15 km away from the dam site, firing intermittently throughout the contract period, the team preferred to keep working round the clock to finish as soon as possible.

Scope of work:
Construction of a cutter excavated cut-off wall through the clay core of the Peruca Dam which had been seriously damaged by the former Yugoslavian Army.