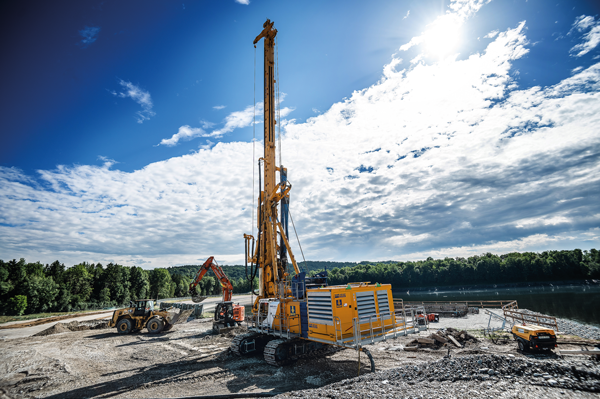 Feldolling, Germany – To protect the residents against flooding, a flood control reservoir with a capacity of approximately 6.6 million m³ (4.6 million m³ and 2 million m³ in the underwater basins of the Stadtwerke Muenchen) will be constructed in Feldolling, in the district of Rosenheim in the lower Mangfall Valley. BAUER Spezialtiefbau GmbH and its joint venture partner Josef Rädlinger Bauunternehmen GmbH were commissioned by the Free State of Bavaria, represented by the Rosenheim authority for water resources management, for a range of construction works. 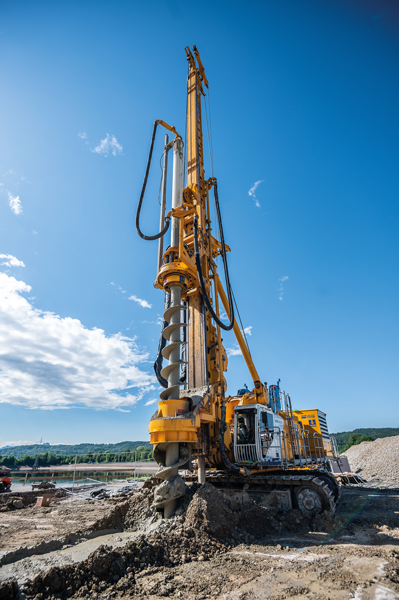 The current project “Flood control reservoir Feldolling, BA8-11” is one of the largest initiatives in Bavarian water management. For this project, Bauer Spezialtiefbau will carry out sealing of the underground barrier as part of the future flood control reservoir, as well as various solid structures for its operation. The work executed by Bauer includes the construction of a mixed-in-place (MIP) wall of more than 21,000 m² as the base and interior seal for the underground barrier. “The construction of a MIP wall was a proposal of ours, since this was not originally planned in the tender,” explains Project Manager Daniel Junger. “This allows us to work not only more cost-effectively but also, above all, more sustainably.”

The excavation pit for the transfer building to the underwater basins of the Leitzachwerke will be constructed as a secant pile wall with approximately 1,700 m² using the double-head system and CFA method. A static diaphragm wall will also be constructed as an excavated single-phase cut-off wall up to a depth of 36 m, of which the top 10 m are reinforced. Out of the total of roughly 7,200 m² of diaphragm wall, approximately 800 m² are being constructed using a special “low head diaphragm cut-off wall” method under a power line. Various sheet pile wall structures are also being constructed and Bauer is carrying out jet grouting work to seal the dam in the area of an existing pipe.

In addition, the software products of fielddata.io GmbH from Munich, which were specially developed for foundation engineering, are being used in this project. Among others, the applications make it possible to send planning data digitally to the drilling rigs, to record construction processes directly at the construction site via tablet, and to create automated bored pile documentation. "We are very pleased to be able to support BAUER Spezialtiefbau GmbH in this project in the area of digitalization. Our goal is to establish standardized data management in specialist foundation engineering and to simplify workflows and documentation," says Jochen Maurer, Managing Director of fielddata.io GmbH.