The number of construction sites in extreme geographical locations has substantially increased during the last 20 years. The contracts frequently involve infrastructure projects to seal the substrata of dams for hydro projects and tailings for mines. Remote sites bring with them all kinds of challenges. Firstly, there is the logistics: the large, heavy equipment has to be transported over long distances, partially on dirt roads and tracks, to reach the site. These hurdles are overcome with experience and great skill. Bauer equipment always gets where it needs to be – safely. The equipment is modified and refitted as required to meet specific project requirements. 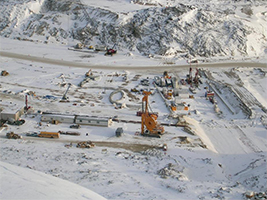 In the Canadian wilderness, 600 kilometers north of Montreal foundation engineering works were executed for the new dam. From autumn 2005 work with the diaphragm wall cutter continued until mid-December, at temperatures as low as minus 28 degrees Celsius. Even in the coldest months (from December to March 2006), the grouting work for the main dam still had to be carried out (under cover) at temperatures of minus 35 to minus 40 degrees Celsius.Despite the remoteness, Peribonka is still a construction site in a highly developed country. Lac St. Jean, 200 kilometers away, is a tourist area, with an airport. The logistics are not too hard to handle. Equipment was shipped to the Atlantic port of Halifax and transported on good roads from there. Even over the final
150 kilometers of forest tracks there were few problems. Equipment could even be transported on ice-roads if required.

Dhauliganga in the Indian Himalaya

The shipment of BC 40 trench cutter, two hydraulic grabs and a crawler crane were transported from the port of Mumbai (Bombay). The first 1,500 kilometers were on manageable roads, the problems started when it came to the 600 kilometer stretch through the mountains. To be able to pass through the gorges, around the tightest bends where progress slowed almost to a halt for hours and to climb over the passes, the equipment had to be taken off the load-loaders and transferred to smaller trucks. The equipment was dismantled down to its smallest possible component parts, such as removing the chains from the crawler carriages for example.

Punatsangchhu-I in the Kingdom of Bhutan

The Kingdom of Bhutan with its capital Thimphu is located at the southern slopes of the Himalaya. It is bordered to the south by India and by China (Tibet) to the north. Geologically the country is characterized by the Himalaya mountain range. The highest point is at 7,554 m above sea level, whereas the deepest is at 97 m above sea level, which is only less than 200 km away. With an annual rain fall of 2,000 mm the country provides a great potential for usable water power.
A number of rigs and equipment had to be transported from Germany to midland Bhutan for executing the project. Although numerous smaller parts could be sent directly to the country‘s main airport of Paro by air freight, all major rigs had to travel by sea: After preparation in Schrobenhausen everything was transported first to Hamburg, then via sea route to Kolkata in North-
East-India.
Starting from Kolkata, the major rigs had to be transported to site via mountain passes reaching heights of 3,000 m above sea level. Some expected challenges had to be overcome: the road condition, much traffic but also mud and rock slides, which made some parts of the way very difficult to pass for the equipment to finally reach the site safely. 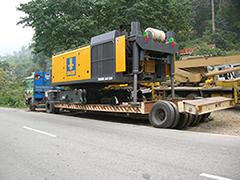 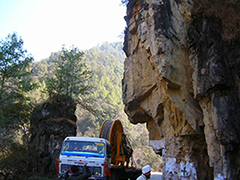 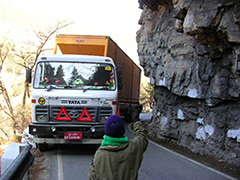