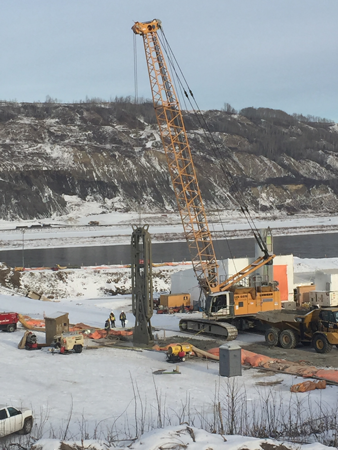 The objective of this dam is the creation of a third hydro-electric power plant on the Peace River in northeast British Columbia (B.C.). B.C. is the westernmost province in Canada, located between the Rocky Mountains and the Pacific Ocean. The dam will be a source of clean, renewable and affordable electricity in B.C. It will provide 1,100 megawatts (MW) of capacity, and produce about 5,100 gigawatt hours (GWh) of electricity each year – enough energy to power the equivalent of about 450,000 homes per year in B.C.

The Peace River is a 1,923 km-long river that originates in the Rocky Mountains of northern British Columbia and flows to the northeast through northern Alberta. The Peace River joins the Athabasca River in the Peace-Athabasca Delta to form the Slave River, a tributary of the Mackenzie River. The Finlay River, the main headwater of the Peace River, is regarded as the ultimate source of the Mackenzie River. The combined Finlay–Peace–Slave–Mackenzie river system is the 13th longest river system in the world.

Approximately 80,000 m² cut-off wall with a nominal thickness of 0,6 m and a maximum of 1.8 m was completed in November 2017 which included a maximum rock embedment of 3.8 m into weak sandstone / mudstone in order to reach the designed cut-off wall toe levels.

The average excavation depth was 21 m with the maximum depth reaching up to 25 m.

The works were executed by utilizing up to three excavation units (both hydraulic and rope grabs).

In order to meet the specified construction schedule, the cut-off wall works had to be executed through the winter months facing the harsh winter conditions of Northern Canada. Temperatures during wall installation were as low as - 25° Celsius (lower than -30° Celsius when considering the wind chill) and this has required a special winterization set-up for the mixing plants as well as the slurry lines.

The cut-off wall construction works were carried out between August 2016 to November 2017 working continuously 24 hrs. per day, 4 days per week.