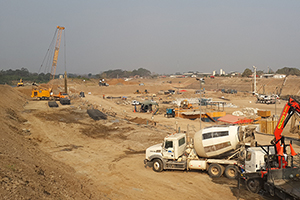 The plastic concrete cut-off wall will serve as seepage barrier to the main lock system. It consisted in the excavation of 165 single bite panels in 3 different alignments up to maximum 27 m deep achieving full completion by October 2013. 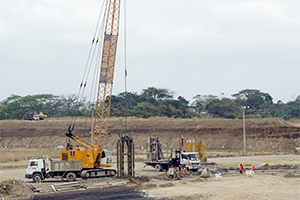 The reinforced concrete diaphragm wall is designed to stabilize and protect the new river slope. Works included the excavation of panels up to 15 m deep and 7.2 m wide over an extension of 509 m, in total 7,632 m² of diaphragm wall. The works were carried out from November 2013 to January 2014 over 75 working days, 25 of which during the rainy season.

The Rio Daule-Vinces water transfer project (DAUVIN) aims to transfer 100 m³/s from one intake on the Daule river to the Vinces, Pueblo Viejo and Colorado rivers, the water will then be diverted to local streams. The irrigation support infrastructure was built to supply an area of 215,000 ha.