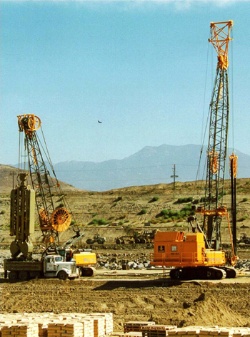 Three deep alluvial channels, extending to 130 feet below the West Dam foundation surface, comprise about a third of the total foundation area. The alluvial foundation soils are highly variable and include pervious zones of dense sandy and gravelly soils with cobble and boulders.

The reservoir project entails the construction of three earth-core rockfill dams. The reservoir when fully filled will double the surface storage capacity for Southern California. The West Dam, under which Bauer´s cut-off walls are located is 285 feet (87 m) high, over 1900 ft. (580 m) long, has a base width of 1200 ft.

(365 m) wide and a crest width of 40 ft. (12 m). Construction of the cut-off wall was accomplished using slurry trench technology, with the excavation performed using the primary and secondary panel sequence. A full-length guide wall system was used to ensure alignment and depth control at each panel. The combination of the cutter and the hydraulic clamshell proved to be effective to excavate through the dense alluvium and key into the top of the rock. The clamshell was effective in excavating through bouldery ground. The cut-off excavation was cleaned with the cutter and plastic concrete backfill was placed in the trench through tremi pipes. The construction quality control program addressed verification of excavation alignment, continuity and verticality, slurry control, and plastic concrete backfill slump, strength and hydraulic conductivity.

Scope of work:
The construction of 160,000 square feet (14,870 m2) of cut-off wall through dense alluvial soils using slurry trench technology for the south, middle and north channels of the West Dam structure. The width of the wall was 3 ft. (900 mm) and the maximum depth excavated was 130 ft. (40 m).