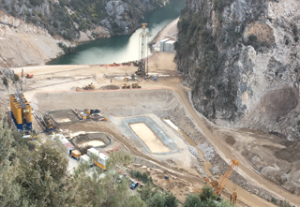 Reaching the dam foundation level at sound rock requires an excavation to some 65 m below the original ground level and river elevation. The hydraulic control is ascertained by two cofferdams, at the upstream (U/S) and downstream (D/S) side, both constructed on alluvial deposits.

Plastic concrete cut-off walls, ranging about 50 m below the foundation of the cofferdams, prevent the water to flow under the cofferdams into the excavation pit. The slope of the deep excavation to the dam foundation level is supported by an arch-shaped bulk head. 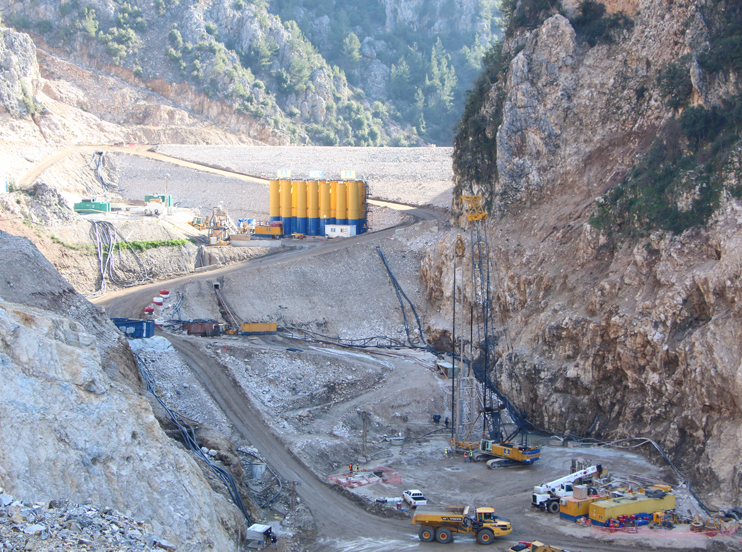 The installed plastic concrete cut-off walls provides the necessary vertical underground sealing below the cofferdams and extends over a length of 128 m (U/S) and 161 m (D/S).

Approximately 9,500 m² cut-off wall with a nominal thickness of 1,0 m (U/S) and 0,8 m (D/S) was completed in December 2017 which included a percentage (12%) of excavation through moderately weathered and slightly weathered Limestone (Dolostone/Dolomite) in order to reach the designed toe levels.

The Upstream and Downstream cut-off walls were constructed in a relatively steep valley.
Heterogeneous soil condition

The execution of the cut-off wall was another pioneer work in Lebanon, being the second cut-off wall on dams, the second ever cutter-excavated diaphragm wall and the second plastic concrete application in specialized geotechnical works in the country – after the successful executed Mseilha Dam project by BAUER Lebanon.