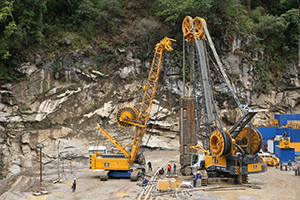 BAUER Spezialtiefbau GmbH has been engaged by Jaiprakash Associates Ltd. (JAL) for the construction of Mangdechhu hydropower plant upstream cofferdam cut-off wall project. Bauer supported the optimized design solution to install a cutter excavated cut-off wall to ensure sufficient water tightness of the cofferdam. The design approach and most of the technical details were prepared from Bauer’s head office experts in Schrobenhausen. To enhance excavation of the alluvium and to prevent the remaining risk of boulders sliding into the open trench, as a soil pre-treatment method boreholes were drilled along the cut-off wall and gravity grouted.

In the upstream cofferdam of the Mangdechhu Hydroelectric Power Plant, Bauer executed 43 panels with a nominal thickness of 1.2 m on a dam length of 107.8 m, overlapping with 30 cm with a maximum depth of 57.45 m. 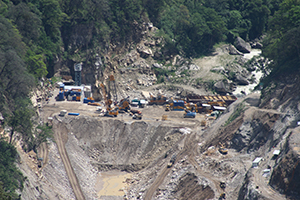 Small diameter drillings, gravity grouting was executed, whose maximum drilling depth was 64 m, providing additional soil investigation data for improved planning of the cut-off wall depth prior to the execution.

At peak times, Bauer had engaged up to 20 skilled expatriate employees on site in day and night shifts in addition to the approximately 30 local labors to work and ensuring quality standards. It has to be mentioned that during execution of all construction works Bauer’s representatives on site had the full technical and logistical support from their head office in order to complete the project with high rank on quality and performance.

Despite surplus quantities of 15 % due to a longer wall compared to the contract and a construction schedule that lasted theoretically 15 % longer in fact, Bauer was able to fi nish virtually on time according to the specified total construction time envisaged for the cut-off wall installation.

The Mangdechhu Valley has no slopewaste (run-of-hill scree) in the area of the very steep shores. It slopes in parts with an angle of up to 80° towards the existing riverbed. The shore on the left side has more moderate slopes. There are also large scale colluvial slope overburdens, as well as river sediments. The soil material is very inhomogeneous. The existing rock in the valley bottom also varies both in its course and its strength, i. e. on the left bank gneiss with individual quartzite deposits and on the right bank more weathered gneiss.