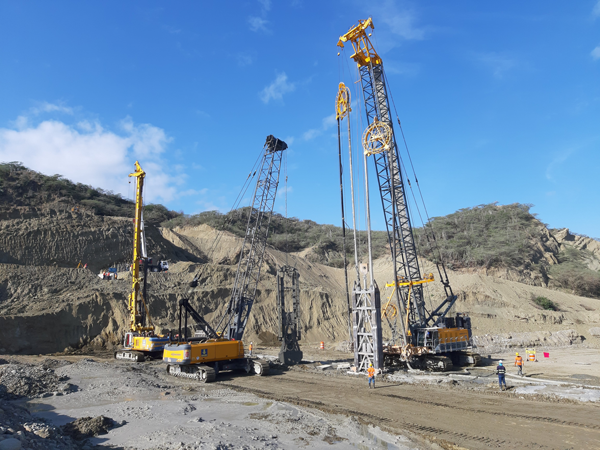 The Monte Grande Dam, in the southwestern province of Barahona in the Dominican Republic, is an important infrastructure project for the country. In addition to controlling water levels in the Yaque del Sur River, the 55 m tall dam will also be used for flood protection and generation of hydroelectric power. Other aspects include tourism and the use of the water from the reservoir for irrigation of agricultural land.

A zoned earth-fill dam with asphaltic core and an impermeable plastic concrete base foundation Cut-off wall will be constructed.

BAUER Fundaciones Dominicana S.R.L., the Dominican subsidiary of BAUER Spezialtiefbau GmbH, was commissioned to execute the Cut-off wall to seal off the dam base. 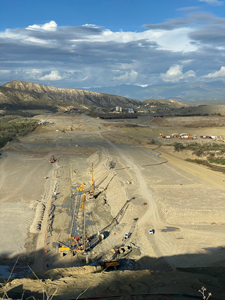 Cut-off Wall with a nominal thickness of 800mm using plastic concrete as construction material. In total, Bauer constructed around 26,000 m² of cut-off wall over a length of 1,350 m. The average excavation depth was 20 m with a maximum depth reaching up to 31 m.

Works started in May 2019 and were successfully completed in May 2020. In total, 71 Bauer employees participated in the project, contributing their expertise and experience gained from previous projects in the Dominican Republic and internationally.

The works were executed by utilizing one BAUER MC96 duty-cycle crane with BAUER BC40 cutter and Hose Tension System, two numbers of base carrier with grab and - among other equipment – a BE500 separation plant from BAUER MAT Slurry Handling Systems.

Heterogeneous soil conditions with horizontal and inclined layering and variable thicknesses of generally three groups of soils and rocks.

Aquifer made of loose granular materials. They are continuous and of variable extension, made of unconsolidated clastic sediments, like silts, sands, gravels and boulders. The recent quaternary alluviums and alluvial terraces are up to 14 m thick. This layer occurred along most of the jobsite where it varied from being completely saturated (low areas, river bed) and relatively easy to be pre-excavated with the grabs. 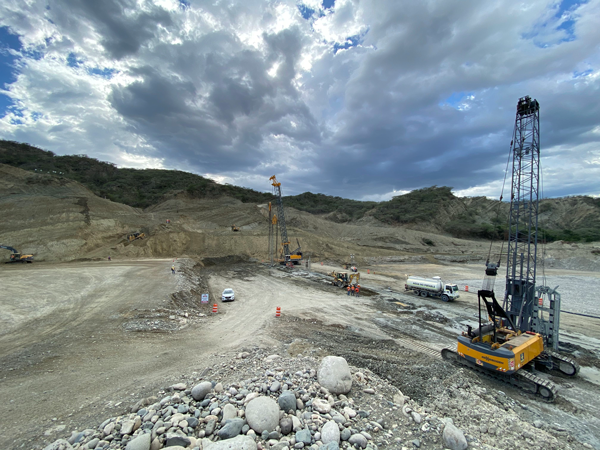 Among them are two different lithological units from the Pliocene, which occur in alternating layers and show an inclined orientation.

Aquifers made of compact granular rocks. Materials of limited extension, in layered horizons, made of consolidated clastic sediments of coarse and variable granulometry: conglomerates and sandstones.

Aquitards made of compact granular rocks. Materials of limited extension, in layered horizons, made up of consolidated clastic sediments of fine granulometry: sandstones and mudstones

Each panel has an embedment of minimum 3 m in the sound sandstone and/or mudstone bedrock of the aquitard.

In total 550 no of single-bite panels were executed.

The execution of the cut-off wall was real pioneer work in the Dominican Republic, being the first cut-off wall on a dam project for Bauer Dominica and the first ever cutter-excavated cut-off wall application in specialized geotechnical works in the country.