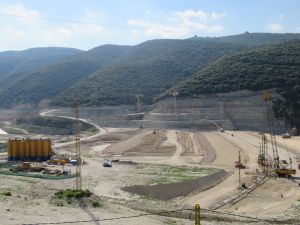 The site of Mseilha Dam is located in the northern part of Lebanon on Nahr El-Jawz river approximately 50 km north of Beirut. The site is upstream of Qal'at El-Mseilha (Mseilha Fort) near the city of Batroun. Batroun is one of the oldest cities in the world.

The development includes a 400 m long and 35 m high dam, a gallery of temporary diversion, a spillway and the inlet structure. 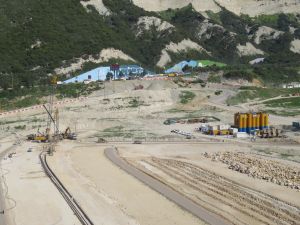 The installed plastic concrete cut-off wall provides the necessary vertical underground sealing below the actual rockfill dam section for a new water reservoir and extends over a length of 400 m.

Approximately 10.500 m² cut-off wall with a nominal thickness of 1.0 m was completed in June 2017 which included a percentage (17%) of excavation through moderately weathered and slightly weathered marly limestone / marlstone in order to reach the designed toe levels.

The average excavation depth was 38 m with the maximum depth reaching up to 49 m.

The execution of the cut-off wall was real pioneer work in Lebanon, being the first cut-off wall on dams, the first ever cutter-excavated diaphragm wall and the first plastic concrete application in specialized geotechnical works in the country.