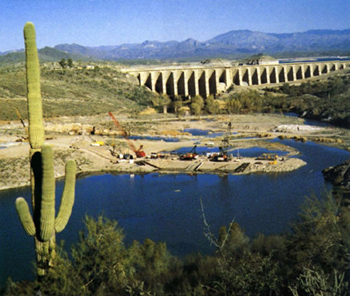 The New Waddell Dam is planned to cover the growing water requirements of the Phoenix region in Arizona, USA. The new earthfill dam is to be constructed about 800 m (875 yds.) downstream from the existing concrete dam built in 1927, thus increasing the volume of the basin from its present 185 million cu.m (242 million cu.yds.) to 1'233 million cu.m (1'613 million cu.yds.).

The Bauer-Raymond Joint Venture was awarded the contract for sealing works in the permeable ground under the planned new dam. The sealing measures took the form of two cut-off walls. The excavation of the trenches was extremely difficult due to the form and hardness of several rock layers. Chiselling and blasting was inevitable. The most difficult part of the works was the excavation of the marginal panels along the almost vertical slopes of hard rock consisting of Andesite-Conglomerates and Tuff.

In some cases the excavation procedure had to be interrupted due to boulders or rock layers causing deviations beyond the permissible tolerance. Complicated drilling and blasting operations were then required to remove such obstacles, sometimes from a trench bottom more than 30 or 40 m (100 or 130 ft.) below the working platform.