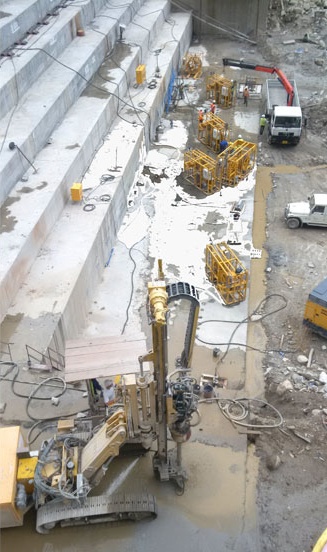 The Punatsangchhu-II Hydroelectric project (1,020 MW), on river Punatsangchhu is spread along Wangdue – Tsirang National Highway in Wangdue Phodrang Dzonkhag of Bhutan in the Southern Himalayas, about 80 km east of Bhutan’s capital Thimphu. The project has been jointly promoted by Royal Government of Bhutan and the Government of India under the Royal Government of Bhutan policy to implement hydro power projects within the country. The present project is being implemented through Punatsangchhu-II Hydroelectric Project Authority (PHPA).
For execution of the main dam, permeation grouting was proposed to be carried out at the upstream and downstream cofferdams up to the rock level to create a cut-off in order to control the water seepage in the dam pit during the construction. On March 2014, Jaiprakash Associates Ltd. awarded BAUER Spezialtiefbau GmbH the permeation grouting works at the upstream cofferdam. The length of the grout curtain for seepage barrier at the upstream cofferdam is 170 m. The U-shaped valley is filled with alluvium in the river bed; river borne material (RBM) and gneiss or granit boulders with size up to few meters. The bedrock quarzo-feldspatic gneiss reaches from the exposed surface down to 30 m (on average) below actual working platform elevation. Three grout rows were used to form the permeation grouting curtain wall, cement grouts (cement and bentonite) were used for the outer rows and gel grouts (sodium silicates and hardener) were used for the inner row.
On May 2015, Bauer completed successfully the works. Approximately 35,000 linear meters have been drilled and grouted since the award in 2014. The works were executed by utilizing two drilling units Klemm KR 806-2DB and 12 Obermann grout pumps over a construction period of 12 months.