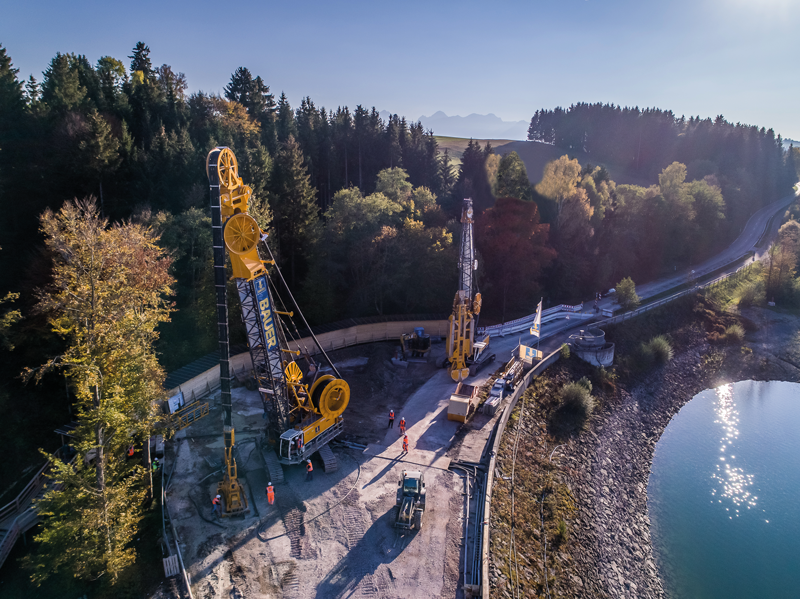 Neuschwanstein Castle is a palace commissioned by Ludwig II of Bavaria and was never completed but opened to the public in 1886, after a construction period of 17 years and shortly after the “Fairy Tale King” had died. Today, the castle is a touristic hot spot in Germany, even with ongoing restoration works.

About 10 km further north, in 1954, the construction of the Rosshaupten Dam was finished and has created the lake Forggensee, with a total area of 16 km² (172 square feet). The dam structure and reservoir is used for power generation as well as for low water elevation and flood protection for the downstream areas. The area has naturally developed into a popular location for recreation activities.

The dam structure is an approximately 40 m (131 feet) high, (earth-)filled dam with a supporting body of gravel and debris and a centered sealing core, which consists of material having a high cohesive clay content. As part of the modernization, the experts and planners decided to replace the internal sealing of the dam by a 1 m (39.37 inch) thick and 70 m (230 feet) deep diaphragm wall. 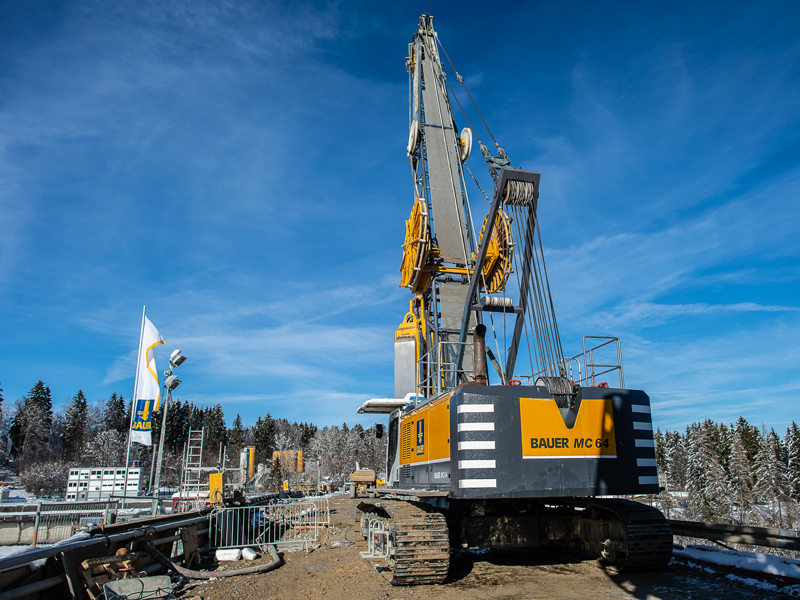 BAUER Spezialtiefbau GmbH was awarded the construction of not only the 70 m deep cut-off wall but was also the implementation of a soil stabilization. Percussion drilling and Tube-à-Manchette (TaM) injections were executed to a total 2,100 m (6,890 feet) scope. The data monitored during all drilling works also gave valuable information for the later grab and cutter excavation for the trenching. The data were digitalized and a 3D model was produced step by step for way of real time documentation and visualization using Bauer’s specialist digitization B-project model.

A unique application was the installation of a BAUER Mixed-In-Place (MIP) structural retaining wall aligned either side of the later cut-off wall trench. The MIP was designed as a protection in case of high water loss rates during the excavation which was seen a remaining risk by the Technical Expert Panel.

Description of the executed drilling and grouting works campaign: Sonic drilling of the actual dam body and rock drilling with Wassara drilling method. Sealing of the actual dam clay core with Tube-à-Manchette method and the lower bedrock layer with standard rock injection (combination of descending and ascending injection method); in total 24 numbers of boreholes with a maximum depth of 85 m (279 feet)

The cut-off wall executed with a length of 13,500 m² (145.313 square feet) is proposed to seal the dam. This project posed a particular challenge: the diaphragm wall could only be built from the very narrow 11-meter-wide dam crest. To make things more complicated, the crest was located unfavorably on the side of the dam rather than in the middle. The cut-off wall, which is 1 m (39.37 inch) thick and 70 m deep, includes socketing into very hard rock and was executed in two steps. First, excavation of the upper 40 m of the dam body was carried out with the help of a BAUER hydraulic grab on a BAUER MC 64 duty-cycle crane. The remaining 30 m, beneath the actual dam body, were excavated using a BAUER BC 40 trench cutter on an MC 96 duty-cycle crane. Bauer carried out the construction work for the cut-off wall seven days a week in day and night shifts – in other words 24 hours a day.

The geology at the site is very difficult. Features like vertical and valley-parallel layers of clay, marl and marl stone with fissures. In the area of the dam the molasse layers are very steep. The molasse below the dam is strongly stratified. The layers often change at intervals of a few centimeters and rarely one layer is several decimeters thick. In parts, voids / fissures of the strata are filled with coal. The fresh rock at the dam shows compressive strengths up to 85 MPa (12.328 psi).

The works were executed by utilizing the following equipment: