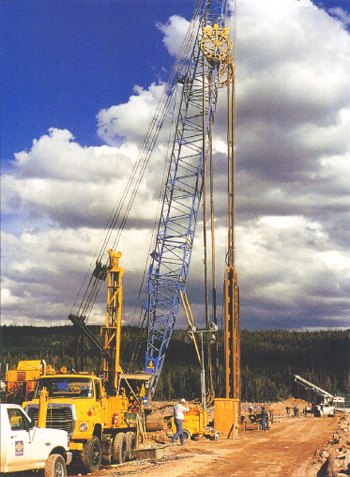 The Meeks Cabin Dam was constructed in 1971 as an irrigation and flood control structure. The 170 ft. high earth fill embankment spans 3'200 ft. across the valley on the upper reaches of the Black Fork River near Ft. Bridger, Wyoming in the SW corner of the state.

The structure with a crest elevation of approx. 2'652 m (8'700 ft.) was founded upon a moraine deposit formed by the glaciation of the Uinta Mountains to the South. These deposits contain various layers of sand, gravel, cobbles, and boulders consisting of hard Quarzite with compression strenghts in excess of 280 N/mm2 (40'000 psi). The moraine deposits below the dam are subclassified as an impermeable glacial till and permeable outwash materials.
Seepage through the outwash materials below the western abutment had posed a serious threat to the stability of the dam. In order to decrease the potential risk, the client advertised a contract to construct a plastic concrete cut-off wall through the embankment and moraine deposits. Bauer of America Corp. was awarded the project.
The contract scope included excavating a trench through the western abutment of the dam, which was to be backfilled with a plastic concrete material to form a low permeability barrier that would mitigate the seepage problem and that would remain flexible during movements such as imposed by a seismic event.
The project was challenging for a number of reasons. First, the working platform at the dam crest and surrounding site was limited. Second, the remoteness of the site and the limited construction season (April through September) posed logistical problems, and finally the excavation itself was to be performed through extremely difficult soil conditions.
Because of these problems Bauer of America with assistance from their German parent company proposed to use a Bauer BC 30 slurry trench cutter to perform most of the excavation. Additionally, grabs have been used on the site, first a conventional cable grab which was subsequently replaced by a new cable suspended Bauer trench grab with hydraulically operated jaws. The grabs were required to pre-excavate the trenches and to remove large boulders with diameters in excess of 1.20 m (48 in).